YOU ARE AT: Business MK > News > Teams rise to law firm’s fundraising £50 challenge 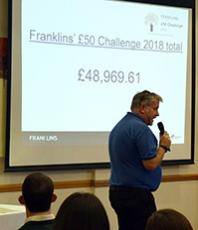 The 25 teams from companies across the region that took part in the inaugural Franklins £50 Challenge to raise money for Cynthia Spencer Hospice in Northampton and Willen Hospice in Milton Keynes have been celebrating the massive fundraising boost the initiative has generated.

The teams took up the challenge – and the £50 – set by regional law firm Franklins Solicitors in January and applied all their business acumen – and some imagination – to devise and undertake a series of fundraising activities over the next eight weeks.

Events ranged from cake sales, quiz nights and raffles to slime sales, a car wash and ‘Curry in a Hurry’. The event has raised a total £48,969.61, to be shared between the two hospices.

Franklins managing partner Simon Long said: “Over the course of the challenge, it was amazing to see way the various teams really threw themselves into the challenge and the variety of fundraising activities they undertook.

"There has been a great deal of enthusiasm from all the teams to help raise money for such great causes and it has been humbling how many people chose to be a part of this activity.”

The leading and most innovative fundraisers took centre stage at a special awards night hosted by Franklins to celebrate the end of the competition with Cynthia Spencer Hospice’s fundraising manager John Helm and Amy Shaw, corporate partnerships fundraiser at Willen Hospice, presenting the awards.

She said: “The Franklin’s £50 Challenge has been a wonderful success. Every team that participated displayed fantastic passion and drive to raise money in support of their local hospice. This passion is reflected in the phenomenal total.”

Most Raised from a Single Event

Willen Hospice:  Handelsbanken (The Music Quiz of the Year).

Willen Hospice:  LeasePlan ‘Where there’s a Willen there’s a way!’

Preparations are under way for the 2019 Franklins £50 Challenge, which will again raise money for the two hospices as well as for local charity Macintyre. To register and to find out more, visit www.franklins-sols.co.uk/50challenge or contact Jodie Commercial on jodie.commercial@franklins-sols.co.uk or 01908 660966.