YOU ARE AT: Business MK > News > Tax firm buys rival to extend service 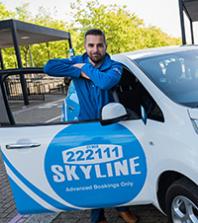 The purchase by Skyline Taxis of A6 Cars is part of a wider plan to expand across Bedfordshire, Buckinghamshire and Northamptonshire.

The firm, based at Bradville, acquired both Phoenix Class and Value Cars of Northampton last year.

Following the deal to buy A6 cars, Skyline managing director Gavin Sokhi has begun recruiting staff to run a new Bedford office, for which planning permission has been granted by Bedford Borough Council.

A6 Cars has been operating in Bedford for the last two years.

Mr Sokhi said: “We are really excited to take the next step in our expansion plan. Up until now, we have been providing a service in and out of Bedford. Now we can provide a local service inside Bedford as well and already have lots of local knowledge through the drivers we have acquired with the business.

“Customer demand for taxis in and around Bedford is growing daily and we are keen to recruit further drivers to meet that demand.”

Skyline Taxis has already introduced electric-powered Nissan Leaf taxis in Milton Keynes and Northampton. Mr Sokhi wants to meet with Bedford Borough Council to discuss how electric vehicles can be implemented in the town.