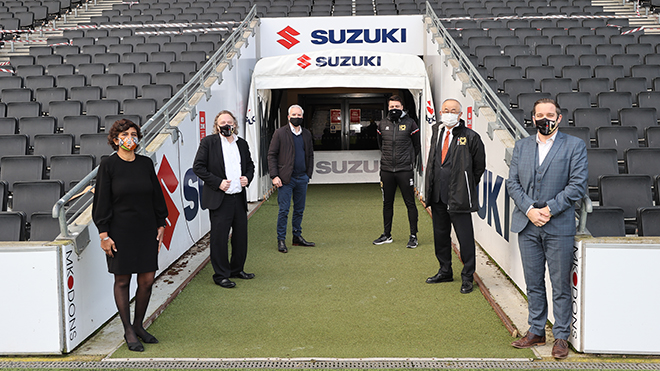 Suzuki GB, whose UK headquarters are at Snelshall in Milton Keynes, will remain the club’s title partner until the end of the 2021-22 season.

The new commitment extends the club’s long-standing relationship with Suzuki GB, which first became title partners back in 2014. The Suzuki logo will remain on the Dons’ first-team playing shirt and replica kits through to an eighth season, with extensive Suzuki branding around Stadium MK.

MK Dons chairman Pete Winkelman said: “This is fantastic news for MK Dons and the Milton Keynes community. Suzuki have been terrific in their support of MK Dons throughout their time as title partners but particularly during this extremely difficult period and they have demonstrated their commitment to the football club by agreeing this new deal at this time.”

Suzuki has maintained their investment into MK Dons’ community initiatives, providing support for the Women’s team as well as the many inclusion and disability activities run by the MK Dons Sport and Education Trust.

Mr Winkelman said: “Not only will it be fantastic to see the globally recognised Suzuki logo remain on the first-team shirts but I am also thrilled that they will be able to continue their excellent work in the community alongside the MK Dons Sport and Education Trust.

“Suzuki are a credit to this city and we’re extremely proud to have this association with them. It’s a privilege for us to work alongside a company who are at the top of their game, who care so much about our Football Club and our city.”

Suzuki GB managing director Nobuo Suyama said: “Our long-established sponsorship of MK Dons has proved a successful and mutually beneficial partnership. Continuing as title sponsor provides a solid foundation on which to further our relationship with the club and maintain the support of the renowned and invaluable work of MK Dons in the surrounding community.

“Suzuki has been based in Milton Keynes for over 15 years and we are proud to be part of the area’s successful commercial sector. As well as reaching out to people outside our business, we also see it as a great way of building pride and engagement with our head office staff, many of whom live in and around the city.”

MK Dons commercial manager Andy Wooldridge said: “It’s a challenging environment for major sponsorships presently. To have a global brand like Suzuki continue to give their backing is huge demonstration of the reputation we have for attracting and retaining partners.”