YOU ARE AT: Business MK > News > Stunning visual spectacle makes a purr-fect evening 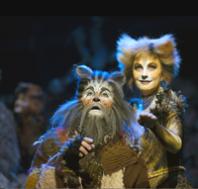 It is a truly stunning production. The movement, energy, timing and athleticism of the cast is breath-taking as they take the audience through portraits of the various character cats at the Jellicle Ball.

It is a special event, held on one night of the year, where the Jellicle Cats line up before their leader Old Deuteronomy who will choose which one of them will be reborn to a whole new Jellicle life.

The show, which returned to the West End in 2014, is based on TS Eliot’s Old Possum’s Book of Practical Cats.

It is one of the longest-running shows in West End and on Broadway, having received its world premiere at the New London Theatre in 1981 where it played for 21 record-breaking years and almost 9,000 performances.

The character cats such as Gus the Theatre Cat, Bustopher Jones, Skimbleshanks the railway cat and of course Old Deuteronomy exude just that; character, in spades, which is a wonderful diversion from the music and dance but if you’re looking for a good story, Cats is not for you.

For the show is one uninterrupted dance sequence. But you can only sit and watch in awe at the high quality of choreography, timing and movement.

The music comes from a live orchestra and the cast make excellent use of the entire stalls as well as the stage, coming out into the audience as part of their prowling.

It is impossible to single out a performer or two but there are songs that anyone will recognise, particularly Memory but also the Magical Mr Mistoffelees, Macavity and Jellicle Songs for Jellicle Cats.

We saw the show on its first night, which was a virtual sell-out, and tickets are selling fast. If you can, make time to see it because it is such a shame to miss a great extravaganza of music and dance.

Cats is at Milton Keynes Theatre until Saturday October 29. Evening performances are at 7.30pm, with matinees on Wednesday and Saturday at 2.30pm.