YOU ARE AT: Business MK > News > Stunning performance receives the ovation it deserves 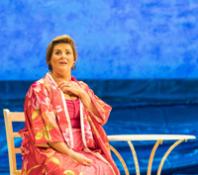 Jodie Prenger plays the title role in Shirley Valentine, Willie Russell’s play about a Liverpool housewife who, bored with the mundanity of her life, accepts a friend’s offer to join her on a holiday to Greece after which life is never the same again.

Faultless delivery, comic timing and personality in spades ensure that Jodie keeps the audience hanging on her every Liverpudlian word. That is no mean feat, in my book, and this is one of the finest performances I have seen on the stage of Milton Keynes or indeed any other theatre.

Simple sets – the first half takes place in Shirley’s kitchen, the second half on a beach in Greece – provide a perfect backdrop to Shirley’s reflections on her life past, present and future.

And that is where the focus of the audience and the play remains. It is a glorious combination of brilliant acting made all the more easy by Russell’s wonderful writing that mixes humour, pathos and a down-to-earth reflection on the typical life of a 42-year-old housewife and mother.

Shirley is weary of her life cooking chips and egg – steak on a Thursday (usually) – for her husband’s return from work at the same time every evening with only her kitchen wall for company. Where has her life disappeared to? she asks the bricks and mortar.

Then her friend Jane invites her to join her on a two-week holiday to Greece. Shirley secretly packs her bags, heads for the sun and – ditched by Jane in favour of a brief holiday fling – starts to see the world and herself very differently thanks to her meeting tavern owner Costas.

The key to this wonderful performance is Prenger’s ability to hold the attention of each member of the audience. It is as though she is talking to them individually, combining humour and banter with the revealing of her innermost feelings.

The humour is relentless, with a string of witty observations, including one featuring the odd combination of Sainsbury’s, sex and Sigmund Freud. ”Sex is like Sainsbury’s…lots of pushing and shoving and not much to show for it at the end."

Yet with the humour comes sentiment, even sadness, as Prenger’s character comes truly alive.

Many of the audience remember the original play, which premiered in Liverpool in 1986, and certainly the film released three years later starring Pauline Collins – who reprised the role she made her own on the West End and Broadway stages – and Tom Conti.

Stepping into Pauline Collins’ shoes is Jodie Prenger, a relative newcomer to the stage having risen to fame by in 2008 winning the role of Nancy in the West End production of Oliver! through the BBC television series I’d Do Anything.

She has certainly come a long way since then. She toured the UK in the musical Tell Me On A Sunday and played the title role in the national tour of the musical Calamity Jane. She also starred in One Man, Two Guvnors both in the West End and on tour, as Lady of the Lake in Spamalot and is a regular presenter on BBC Radio 2.

Shirley Valentine has toured the world but not recently in the UK. Let’s leave the last word to her creator Willie Russell to explain why.

“There have been approaches and plans mooted but, somehow, it has just never quite felt right and so I have resisted such efforts – until now,” he says.

“And what has made the difference? When producer Adam Spiegel introduced me to Jodie Prenger I knew in an instant that here was a formidable actress, one who possessed the grit and the warmth, the drive and the vulnerability, the energy and the heart to make Shirley Valentine really live again.

“How could any playwright resist that or deny the whole of the UK the chance to see Jodie bring Shirley to life?”

What a wonderful decision. A fabulous performance in a play that stands the test of time. Terrific.