YOU ARE AT: Business MK > News > Strategy guru delivers a culture shock to business leaders 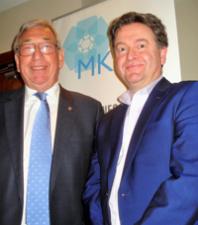 Speaking at the quarterly dinner hosted by Milton Keynes Business Leaders Partnership, he told  members, civic leaders and local arts and creative figures that, although he felt like he was entering the lion’s den, he was there as ‘a critical friend’.

Mr Knell, director of international consultancy Culture Counts, said: “The city’s cultural brand personality is, in my judgement, fine – as it goes. I do not think there would be enough to create a flourishing and distinctive identity and the whole is not greater than the sum of the parts.

“The 2023 bid is your chance to raise the bar and raise your game. But you cannot put lipstick on a cow, even a concrete one, and expect people to not notice that it is still a cow.

“Milton Keynes is a thriving economic hub but not yet a thriving cultural hub. It is not a world-class cultural city like Paris or Rome."

He admitted that, living in Cambridge, he had not heard of the successful biennial Milton Keynes International Festival. He said: ‘You cannot expect everyone to hear about something just because you put it on.”

But, relaxing his agent provocateur role Mr Knell, whose CV includes positioning Manchester as a northern cultural powerhouse, said that to be successful the MK 2023 bid process must include brutally honest conversations between all stakeholders.

It should put culture at the centre of all decision-making and recognise that culture is now a part of all successful places.

He said Milton Keynes had lofty ambitions but it would have to be more nimble, bold, brave and intellectual in output than those it will compete with.

It needs more heart, soul and precision in defining its cultural offer and think about how it does culture differently and recognise its weaknesses, he said.

“What are you going to do differently to make Milton Keynes stand for something that nowhere else can, and in an authentic and inimitable way?” he challenged his audience.

“You must be deadly serious about achieving this and work together embracing a new way of doing things, otherwise your cultural to do list will just remain a list of things to do.”

MKBLP chair Dr Philip Smith said John Knell had a deservedly high reputation as a speaker. “On this subject he has ‘been there, done that’ and I think he has been deliberately provocative tonight.

“It is easy to come along and talk about all the good things we are doing in Milton Keynes but instead he has been frank and tried to help us, to make us think and talk about some of the issues we should be facing up to in the Capital of Culture process.”

In closing, Mr Knell said: “I look forward to visiting your European City of Culture programme in 2023.”