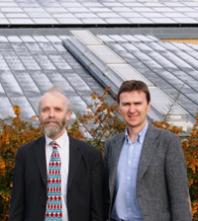 Companies specialising in solar power have launched in Milton Keynes after the then-Labour government introduced the Feed-in Tariff scheme almost two years ago, allowing homeowners to generate their own power and sell energy back to the National Grid.
Around 300 homes have installed solar panels in Milton Keynes alone in the past two years. However, the present government announced in December that funding to encourage solar panel installation was to be cut by more than 50 per cent.
Labour’s Parliamentary spokesman for Milton Keynes Andrew Pakes met executives at the National Energy Foundation in Knowlhill to discuss the potential impact on businesses and individuals.
Speaking after the meeting, he said: “It’s a great way for people to green their homes and protect themselves from soaring energy bills. As a new city we should be at the forefront on creating green jobs and growth, but these cuts to Feed-in Tariffs will hit families, put thousands of jobs at risk and threaten the solar industry.”
The ‘Our Solar Future’ campaign estimates that 25,000 jobs have been created to help businesses and households fit solar panels. These, it says, are at risk following the government’s dramatic cuts to the Feed-in Tariff scheme.
Labour has called on the government to rethink the reduction, warning that it could cost thousands of jobs and stop many families from cutting their energy bills by installing solar power.
NEF chairman and Milton Keynes councillor Brian White, a former MP for the Milton Keynes North East constituency until the last general election, joined Mr Pakes at his meeting with NEF managing director iain Bryne.
Cllr White said: “Councils, community groups and social landlords up and down the country may have to pull the plug on thousands of solar panel installations for social housing and community projects, and could be left out of pocket because of rushed government review of FITs.”