YOU ARE AT: Business MK > > News > Stadium plans to lure the corporates

Stadium plans to lure the corporates 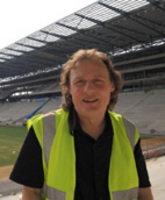 Its designers, the internationally renowned architects HOK, also created the new Wembley, Arsenal FCâ€™s Emirates Stadium and the stadium that hosted the 2000 Olympic Games in Sydney.

The stadium breaks new ground in many areas. It has an open-concourse design that is unique to the UK and the main access to the executive facilities is via a â€˜Gone with the Windâ€™ style staircase leading to the most comprehensive dining and conference facilities in the region.

These include the spectacular Ballroom, a stunning double-height space with minstrels gallery and a capacity of 850. The corporate centre also houses break-out rooms, meetings rooms and a business centre.

A 128-bedroom four-star hotel is incorporated into the upper levels, with 54 bedrooms benefiting from pitch views and balcony. These transform into matchday corporate hospitality boxes.

The stadium has the highest specifications and Pete Winkelman (pictured), chairman of the InterMK consortium behind the stadium, says it is money well spent.

“I want those who come here to have a sense that we cared about it,” he says. “We want to deliver the high aspirations of Milton Keynes so we have black granite blocks on the outside of the stadium – really gorgeous but expensive. Why spend money on it, as it does not generate a penny of revenue? Because it says that this stadium is here forever and will be an integral part of the culture and ambition of Milton Keynes.”

The initial phase of the stadium is due to open in July next year as part of Milton Keynesâ€™ 40th birthday celebrations. It will become home to Milton Keynes Dons FC and the club is set to unveil a series of offers to companies for executives and families at the new stadium.

The complex also will house a 5,000-capacity Arena, home to the Milton Keynes Lions basketball team and an indoor venue for exhibitions, concerts and company functions catering for up to 2,500 diners.

Buckingham Group Contracting, based at Stowe, are responsible for the Â£42 million Phase One contract. Project director Kevin Underwood said: “This stadium is stunning and we feel very proud to be delivering this fantastic project for Milton Keynes. I am very pleased to report that it is on time and on budget.”

The stadium development has brought inward investment of more than Â£100 million into the new city, with 2,200 jobs of a predicted 3,500 created so far.