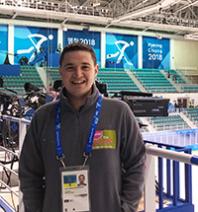 Reporter Liam Morgan pictured has been nominated in the young sports writer category while chief feature writer Mike Rowbottom is in the frame for best sports news reporter.

Winners and highly commended entries will be revealed at the 41st staging of the awards, held by the Sports Journalists’ Association, on Monday (February 26) at the Park Plaza Westminster Bridge in London.

Liam, who joined insidethegames.biz in 2015, has travelled around the world on a number of assignments including the International Olympic Committee Session in Peru and World Championships in four sports.

He is currently at the 2018 Winter Olympic Games in Pyeongchang, South Korea.

Mr Morgan said: "It is great to be nominated with so many other young journalists when the standard of entries was so high.”

The winner of the young sports writer category will receive The Ian Wooldridge Trophy, dedicated to the former Daily Mail journalist who died of cancer in 2007.

Also shortlisted are Adam Crafton and Amitai Winehouse from the Daily Mail and Mail on Sunday, Ben Fisher from The Guardian and Observer, Amy Lofthouse from the BBC, Hugo Lowell from the i and Tom Roddy from Newsweek.

He has written for insidethegames.biz since its launch in October 2005, and is the only writer nominated for the award in his category who does not work for a British national newspaper.

Mr Rowbottom said: "For Liam and me to be nominated for such prestigious awards is a great accolade for insidethegames – a fast-expanding site that I am proud to work for.”