YOU ARE AT: Business MK > News > Sport has key role in business success, says head of Sport England 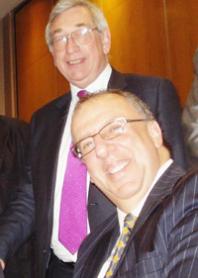 It generates £11 billion for the UK economy and contributes 2.3 per cent of GDP.

Mr Bitel was speaking to an audience of business, academic and community leaders at a dinner in Milton Keynes hosted by the Milton Keynes Business Leaders Partnership.

He outlined the business case and called on the city’s business community to back the national Workplace Challenge that is encouraging businesses to compete through sport as well as commerce.

Mr Bitel said: “The message is that sport is good for your business. If there is anywhere in the UK that understands what sport can deliver it is Milton Keynes.

“Your employees are a key resource, take care of them and get them doing sport.”

Encouraging staff to take up sport was good for the nation’s health, tackling obesity and promoting a competitive attitude that would help in securing a job.

Initiatives such as Sport England’s Kickz football programme is cutting youth offending significantly where it operates and sport programmes in schools were improving educational achievement and encouraging social cohesion.

Milton Keynes as a Sporting City is one of five key themes that MKBLP is exploring as a driver for the economic growth of the city. Milton Keynes Council last year created the Milton Keynes Sports Board to deliver its strategy of an international sporting city.

Mr Smith added: “We are very much into our sport here and it gives us a valuable opportunity to promote Milton Keynes. But it is important that the MK Sports Board co-ordinate all those involved in sport, including the business community, towards forming a long-term strategy.”

Mr Bitel said that delivering sport in the future would move away from public bodies and towards a ‘mixed economy’ model. “There are so many businesses that can deliver sport. We need to look at how they can work together with local authorities,” he said.

His visit to the dinner, held at Jurys Inn in Central Milton Keynes, follows the publication in January of a report by the Open University that said hosting major sporting events such as the Rugby World Cup and professional football brought both tangible and qualitative benefits to Milton Keynes.

It said that sport as a central part of Milton Keynes’ economic development was “crucial”.