YOU ARE AT: Business MK > News > Spending review: it could have been a lot worse, says economist

Spending review: it could have been a lot worse, says economist 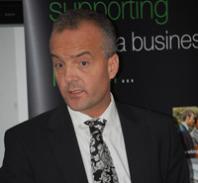 Graeme Leach was speaking at a lunch hosted by the Institute of Directors at StadiumMK. He told his audience of senior executives that the cuts could have been “a lot more brutal”.
He welcomed measure to ringfence spending on key infrastructure projects, which were important to economic recovery. In real terms, the cuts proposed by the government amounted to only 1% per year after inflation.
Mr Leach (pictured), the IoD’s chief economist and director of policy, said: “The gloom merchants have overdone it. These cuts are not half as brutal as people think. It is growth-positive, not growth-negative.”
The cuts, while the longest sustained spending reduction in history, were coming at the end of the longest sustained increase in public spending, he said.
Yet the UK had been in this situation before: in the early 1990s, when public sector employment fell by 800,000 as the government battled to restore public finances, and again when Labour came to power in 1997 having committed to implement former Tory Chancellor Kenneth Clark’s spending plans.
Mr Leach said: “You can downsize the state but you cannot downsize the economy. The UK will not grow as strongly as in the 1990s because the international backdrop is weaker and because of the legacy of the banking crisis.”
Interest rates would remain at or around their current levels “for years rather than months”, Mr Leach added. Sterling would also weaken against the euro and the US dollar, which would help exports.
However, he criticised the government’s decision to implement a 50% rate of income tax for top earners. “It is a huge mistake,” Mr Leach told his audience.
“It sends a bad signal to business and to inward investors. It is about politics, not about economics.”
He also said that public sector productivity had to improve sharply and quickly. “If it had matched the private sector, the public deficit would be £60 billion less,” Mr Leach said.