YOU ARE AT: Business MK > News > Specialist salon takes the short cut to success 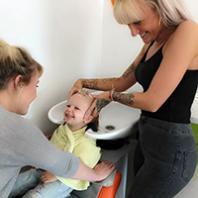 ShortCuts caters to children from six months to early teens, offering hair cuts in novelty car salon chairs while the youngsters watch Tv or play video games.
Since launching in 2015, ShortCuts has secured a partnership with retailer Mothercare, which has seen the opening of five salons in Leeds, Bristol, Romford, Dudley and Leicester.
Three years on, ShortCuts now plans to create its own product range and franchise the business across the UK.
Founder David O’Neal, 32, previously worked in the financial sector but always dreamed of becoming his own boss.
As a father, David was well aware of the difficulties of keeping children occupied while getting their haircut and spotted a gap in the market for children’s hairdressers.
Despite having no hairdressing experience, David approached the government-backed Start Up Loans Company, part of the British Business Bank, for help in turning his vision into reality. He secured funding of £15,000, which he used to furnish and fit out his first salon.
“As a new business owner, I’m incredibly proud to have started a business from scratch, which has since grown to nine stores across the country,” he said.
“Although I did not have former hairdressing experience, I spotted a great business opportunity and needed the financial injection to make it work. After receiving the Start Up Loan, I was assigned a mentor to help me map out a business plan.”
Joanna Hill, managing director of the Start Up Loans Company, said: “ShortCuts’ growth in only three years is a fantastic example of a business idea that has responded to a gap in the market, and has thrived as a result.

“David has created a national brand in under three years, which is testament to his hard work and entrepreneurial spirit.

"While our loan recipients often say that starting a new business can be challenging, especially in the early stages, it’s extremely rewarding to create and build a brand from start-up onwards.”