YOU ARE AT: Business MK > News > Software firm’s delight as it opens new HQ 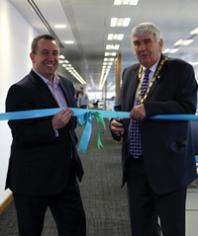 Vmware has spent the past three months refurbishing the entire Phoenix House in Station Square, where it houses its Europe, Middle East and Africa VMware AirWatch and End-User Computing operations.

Mr Evans said: “It is no accident that we ended up in Milton Keynes. It is a great place for a tech hub company and a phenomenal place to acquire talent. I am very proud of the fact that we built a top class organisation that became a world software leader. We moved into the Phoenix House in April 2012 and just within four years our company has been experiencing a phenomenal growth.”

Cllr McLean said: “It is great to see that we have lots of talented people in VMware AirWatch who are delivering services from sales, engineering, support, finance and it is giving a great deal of employment to people to work for a first-class global company based in Milton Keynes.

“The fact that AirWatch is here in Milton Keynes already is a success, employing a significant number of people. This will encourage even more organisations to come to Milton Keynes.”