YOU ARE AT: Business MK > News > Society elects new president 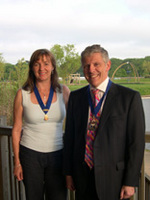 Speaking at the AGM and dinner, which was also addressed by safari park chief executive Chris Webster, Mr Tucker spoke of the vibrant course and educational programme run by the society with 36 courses for chartered accountants in the district each year.

The society is also planning to run its successful Back to the Workplace seminar, aimed at professionals who have taken a career break and are thinking about returning to work.

During his term of office, Peter plans to place special emphasis on encouraging young members of the society and plans to stage a conference focussing on members who work in industry.

Mr Tucker, partner at Hertfordshire chartered accountants Dickinsons, also announced that the speaker for the societyâ€™s annual dinner in February next year will be ex Mayor of London, Ken Livingstone.

Maureen Lamburn, partner at accountants Lamburn and Turner in Wheathampstead was appointed deputy president. She is pictured with Mr Tucker.