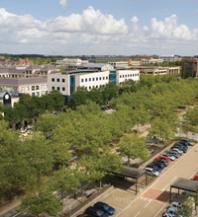 Their study will focus on Milton Keynes. With over half of UK cities implementing smart projects, the findings will help ensure that Smart City developments are accessible to as many people as possible who can engage with the concepts of a smart city.

The two-year project, which starts officially in January next year has been given funding by the Economic & Social Research Council.

It will concentrate on Milton Keynes to examine what kinds of users, citizens and consumers are likely to embrace the smart policies, technologies and vision.

The aim is to enable a wide range of public and private-sector local stakeholders in Milton Keynes to understand much better who their smart activity is engaging, how and why.

The OU’s project lead Professor Gillian Rose said: “Although local community and citizen participation is a pre-requisite for a successful smart city, almost nothing is known about how smart policies and technologies actually engage city residents and workers.”

Smart cities use the data from digital technologies to enhance their sustainability by encouraging more efficient use of resources, economic growth from innovating new products and markets and openness through greater citizen participation in local governance).

They are a global phenomenon at the heart of UK urban development and are influencing how many cities are planning future growth.

Smart technology in UK cities takes many forms, from smart grids, to sensors and chargers embedded in the built environment, to smartphone apps, to online open data repositories and dashboards.

Professor Rose said: “Who are smartphone apps designed for and what social needs do they ignore? What kind of populations are described by smart data hubs, and who do policies using such data therefore address?

"Many are concerned that smart activity may well not reach socially marginalised groups and individuals, for example, and that it might therefore contribute to increased levels of social polarisation in cities between the digital ‘haves’ and ‘have-nots’.”

The project has been designed in collaboration with a range of local and national stake-holders in the UK smart city scene, including Milton Keynes Council, MK:Smart, the Transport Systems Catapult and Community Action MK, the umbrella group for voluntary and community groups in the city.

“The Open University and Milton Keynes Council have worked closely together on the MK:Smart project that has seen us recognised as a leading UK smart city.  This new research project will build our reputation further and help set an agenda for future work together.”

The Open University and Milton Keynes Council are both partners of MK:Smart, a consortium bringing together higher education and industry partnership to help secure the future economic growth of Milton Keynes.