YOU ARE AT: Business MK > News > Simulator for new stealth fighter aircraft opens at Lockheed Martin 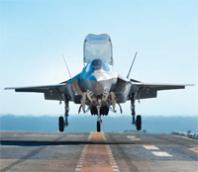 The Virtual Analysis Laboratory is designed to allow current and future pilots and engineers of the fifth generation stealth fighter jet to assess the aircraft’s mission system and put the software through its paces.

By simulating battle scenarios, users gain a realistic understanding of how the F-35B will operate. The virtual cockpits, networked together to emulate multi-aircraft operations, allow military personnel and industry to test how the software responds to a variety of situations.

Lockheed Martin is then able to use the VAL output to tailor how the UK intends to operate the aircraft either in sovereign missions or with coalition forces.

The work done at the VAL will contribute to the development of updated software that will be fitted to F-35Bs.

The VAL offers a flexible and affordable design and analysis environment that will be increasingly important as the UK takes delivery of more aircraft.

The virtual testing and operational analysis that will take place in Ampthill will complement the flight training that is being carried out by Royal Navy and Royal Air Force crews on the UK’s F-35B aircraft in Florida ahead of the new UK aircraft becoming operational in 2018.

Lockheed Martin UK chief executive Stephen Ball said: “This purpose-built simulation facility for the F-35B will enable the MoD and industry to maximise the aircraft’s capabilities specifically for the Royal Navy and Royal Air Force.

“Establishing the F-35 VAL in the UK will prove invaluable as the programme matures and its highly classified nature means users will be able to replicate real life operational situations and put the mission system to the test in realistic scenarios.”

Air Commodore David Waddington, Air Commodore Lightning II, who opened the facility, added: “The ability to develop and test mission software rapidly has been proven to give the UK a combat edge on our existing combat air platforms during recent operations.

“The introduction of F-35 Lightning II represents a step change in our combat air capability and with it an increasing need to design, develop and test mission software in ever more rapid timescales if we are to maximise the aircraft’s enormous potential in future operations.

“I hope the Virtual Analysis Laboratory will become a real force multiplier for the Lightning II Force, providing the men and women who will employ the aircraft in combat the confidence that whenever they deploy they will have the very best capability available to them, developed and tested in the most realistic synthetic environment available.”