YOU ARE AT: Business MK > Lifestyle > Shoppers spend up to 4x normal as stores reopen

Shoppers spend up to 4x normal as stores reopen 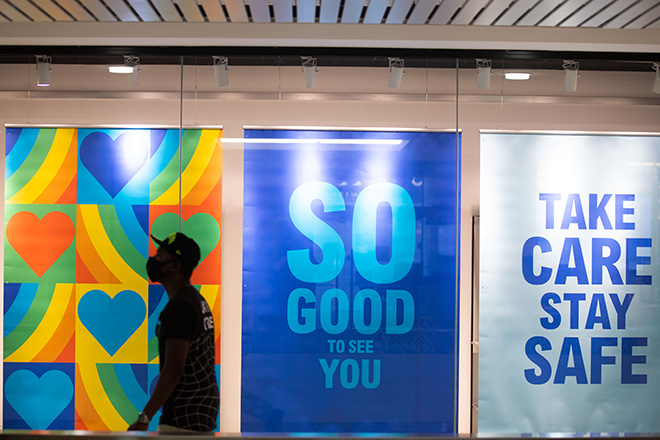 centre:mk, one of the UK’s top 10 shopping centres, reunited shoppers with their favourite brands as over 80 stores re-opened including Primark, Next and TK Maxx. With 18 doors, and a natural, open retail environment, the centre had been planning its phased re-opening for a number of weeks while reminding shoppers to ‘play your part’. Credit: David Parry

SHOPPERS have been spending up to four times the average transaction value as retail opened its doors at centre:mk this week.

The centre reported a significant growth in spend as average transaction values have been as much as four times higher than pre-Covid levels as footfall soared by 254% week on week.

Centre director Kevin Duffy said: “We have made extensive plans for our shoppers to be able to return confidently and so far it has paid off. Queues for popular stores such as Primark and TK Maxx hit 30 minutes when stores opened first thing but because we have such wide malls and large stores, the capacity has been absorbed quickly.

“Buskers were on hand across the scheme to entertain those waiting and keep everyone moving and there was a great buzz about the centre, while feedback from shoppers was really positive.”

As stores opened, shoppers were asked by the centre to “play their part” and abide by the social distancing measures that remain including using the hand sanitising stations, following a one-way system in each section of the centre and, when required to wait, doing so in the areas indicated.

Over 80 stores have reopened with more to follow, including John Lewis, over the next few weeks.  centre:mk had developed an operating plan that, coupled with the design of the iconic centre, with its 2.5km of wide mall and 18 exterior doors, all helped shoppers to return with confidence.

Mr Duffy said: “We were expecting footfall to be down given the level of expectation in relation to queues nationally but with spend significantly up, our estimates were about right, with many retailers reporting significant growth in spend and average transaction values year on year.

“Given the success of today and the ease with which people have been able to return, we expect that spend and footfall will steadily grow over the coming weeks,”