YOU ARE AT: Business MK > > Training > She is like sunshine 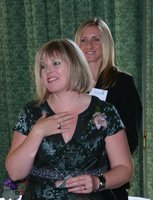 Pauline Stewart, who works at Ingram De Havilland in Shefford, did not know that her co-director Mike Smith had nominated her until she heard her name read out at the Bedfordshire Businesswomen networking groupâ€™s annual awards lunch.

In a heartfelt nomination, he voiced his profound gratitude to Pauline for her pivotal role in ensuring that IDH was flourishing. “It is not just what she does but also the way she does it,” Mr Smith said. “Sheâ€™s like sunshine.”

He highlighted the inspiration and support Pauline had given to her colleagues, associates and all the delegates who attend the companyâ€™s leadership and development courses.

A shocked Pauline said: “Iâ€™m so grateful to Mike, who has mentored me for a number of years and has helped me get to such a rewarding place in my life. This award is a really important milestone in my own personal development.”

She added: “Iâ€™m delighted that our winner so obviously deserves this title and also was nominated by her co-director. I hope that this will encourage more managers and CEOs to put forward the name of their most valued female colleague or employee next year.”

She also thanked the awardsâ€™ major sponsors: Barclays and the Bedford Development Agency, as well as Christin van Geuze Jewellery, Hilliers HRW, Castle Promotions and Wright Connections for their support.