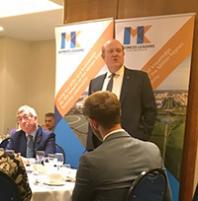 The grandson of Sir Winston Churchill was the guest speaker at a quarterly dinner hosted by Milton Keynes Business Leaders Partnership.

He stressed the overriding importance of government and the huge impact the delivery of public service has, from regulation on monopolies and banking, to hospitals and pensions.

“The profit motive of private companies is incompatible with public sector ethos. But, what matters is the outcome,” said Sir Rupert. “We need to understand that profit is a fee, a fee which allows us to reinvest.”

With 33,000 recorded prison assaults, including 325 deaths, in a 12-month period, he dispelled the myth that prisoners have a ‘cushy’ time in prison.

Yes, prison needs to be unpleasant, a deterrent, he argued. But a huge proportion of prisoners currently incarcerated are illiterate and, with only 70 ‘lifers’ in UK prison today, the focus should be on reform to make them better people on release.

Quoting an extract from The Prison Officers Training Manual, a legacy of his grandfather’s Home Office administration, he said: “When prisoners are in their cells, the punishment is lack of freedom and not to be scared to death.”

Contesting the annual £30,000 spend per prisoner, the government should rein in spending of “scarce” public resources. How much do we want to spend on someone who has broken the law? he asked.

“It is how we strike the balance on spending on the lawless as opposed to those who abide by the law.”

Quizzed on the role of the not-for-profit third sector, Sir Rupert said that it can work well with both the private and public sector. “It can be fantastically powerful. The private sector insulates the third sector from the nightmare of government and can provide the infrastructure needed.”

Sir Rupert was introduced by MKBLP chair Philip Smith, who drew on the comparison of the demise of Carillion and the success of Serco and questioned the ethical complexities of contracts and the issues surrounding outsourcing.

Ever since the Margaret Thatcher era, which ushered in a denationalisation policy, the view that private was good and public was bad has taken root.

“We have taken this dispensation for granted but what we do not see when private companies start providing government services is how difficult being in government actually is,” Mr Smith said.