YOU ARE AT: Business MK > News > Senior partner challenges Olympic medallist (and guess who came out on top?)

Senior partner challenges Olympic medallist (and guess who came out on top?) 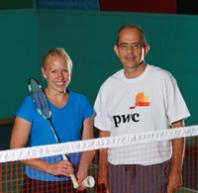 Mr Robinson challenged Olympic medallist Gail to the game after winning a badminton shirt autographed by the top player and other leading British players at a charity auction held during a Milton Keynes Business Leaders dinner in July.
The two are pictured after the game, which took place at the National Badminton Centre on Bradwell Road in aid of Gail’s chosen charity Willen Hospice.
It ended, perhaps not surprisingly, 21-4 to Gail. However, Mike entered the game one point up when he beat Gail in a quiz on each other’s areas of expertise during an interview earlier that day.
“It was a real experience to be given the chance to play such a talented player for such a worthwhile cause,” he said.
“Who would have known that not only would I successfully bid for Gail’s badminton shirt in the recent auction  but also get the chance to actually play her here in Milton Keynes. It has actually persuaded me to start playing regularly again.”
Gail’s sporting accolades include, her success as a mixed player with her partner, Nathan Robertson, which led to being crowned Olympic Silver Medallist in Athens 2004, World Champion in 2006 and Commonwealth Champion in 2006.