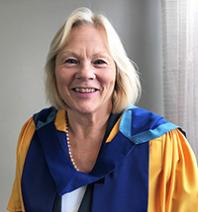 She said: “I am thrilled to be awarded a doctorate from the Open University as I have upheld the values of openness and access to opportunity for all throughout my professional life.

“It is a huge honour to be formally recognised by a unique, globally renowned university headquartered in the amazing city of Milton Keynes where I have lived and worked for over 30 years.”

Dr Limb, who received an OBE in 2011 and a CBE in 2015 for her services to business, education and public services, was the youngest further education college principal in UK history when she was appointed to Milton Keynes College in 1987 at the age of 34.

She founded the Helena Kennedy Foundation in 1998, which supports disadvantaged learners to move from FE into university and in 2000  became chief executive of the University for Industry, where she established the online platform Learndirect and in that role, she also oversaw the development of UK online and Directgov.

Two years ago she became the first woman to chair the Scout Association, the largest mixed volunteer-led movement in the UK.