YOU ARE AT: Business MK > News > Seize your opportunities, ex-High Sheriff tells graduates 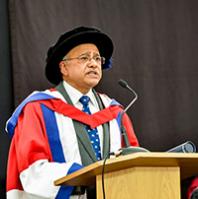 Vinod Tailor, who recently finished his term of office, received an Honorary Doctor of Business Administration at a graduation ceremony at the university’s Putteridge Bury campus, in recognition of services to business and the local community.
Mr Tailor came to the UK from Uganda as a refugee in 1972. He worked at Tesco while studying at high school before beginning his working life at NatWest Bank as a messenger, where he quickly worked his way through the ranks.
He went on to enjoy a successful career, spanning over 40 years, in the banking and financial sector.

More recently Her Majesty The Queen appointed him as High Sheriff of Bedfordshire to act as her representative in the county for all matters relating to the Judiciary and the maintenance of law and order.

Speaking to graduates after receiving his degree, Mr Tailor said: “This role taught me a lot about humility and what people have done by putting themselves second and putting others first in serving the community and voluntary sector, which is a great part of the United Kingdom.”
He told the Class of 2018: “This country provides the best opportunities and in your chosen careers. Please give your best and remember that you are part of a bigger community and should be a responsible citizen.”
Also joining the hundreds of Business School students graduating were honorary degree recipients Jane Ashton, director for sustainability at Luton-based travel company TUI, and Jim Thakoordin, an ex-governor of the former Luton College of Higher Education who played a crucial role in the campaign to transform the college into originally the University of Luton and in 2006 the University of Bedfordshire.
He received an Honorary Doctorate of Political Science in recognition of his services to community cohesion and public life.
Ms Ashton was one of the first ambassadors for sustainable tourism in the private sector and recognised, before many, that if the industry did not play its part in driving sustainability, destinations, people and cultures would suffer.
She was presented with an Honorary Doctor of Science in recognition of her outstanding services to tourism.
“I am very honoured to receive this award,” she said. “More than that, I’m really gratified that this award gives recognition and a platform to the issue of tourism and sustainable development.”
Mr Thakoordin, who has been involved in local, regional and national politics, trade unions and community organisations since the 1960s having come to the UK from Guyana at the age of 17 with no qualifications, told the new graduates: “I congratulate you all and to see so much diversity amongst you is an honour.

“It is up to you to change the world, you are the future, the movers and shakers of the future.”