YOU ARE AT: Business MK > > Training > Scheme breaks down the skills barrier

Scheme breaks down the skills barrier 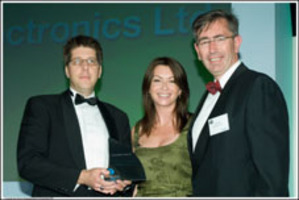 FOR THE previous 12 months, Axis Electronics had been running with three production vacancies. A constant search for suitable recruits had proved fruitless.

The shortage of skilled staff was threatening the expansion plans of the company, formed in 1995 after a management buy-out of Texas Instruments. It was then that the company decided to â€˜grow its ownâ€™ skilled staff with a new apprenticeship scheme.

The initiative has proved successful for Axis, who make high quality printed circuit boards for defence, telecom and IT industries, winning it a East of England Training Award in this yearâ€™s National Training Awards.

Finance and human resources manager Paul Tipping (pictured left after receiving the award with Axis managing director Phil Inness) said: “Inability to increase skilled staff levels would have meant having to turn down orders and therefore risk losing customers. We decided that the best way forward to ensure sustained skill levels is to grow our own talent, and we decided to invest in apprentices.”

Originally, Axis required three apprentices but decided to recruit five, assuming that two would leave within months. None have. Recruited from more than 40 applicants, the school-leavers, aged 16 to 18, have made “brilliant progress” in their 18 months with the firm at its base in Manton Lane.

Mr Tipping said: “Taking on five apprentices was a big decision at the time as it meant increasing our workforce by more than eight per cent.”

The four manufacturing apprentices did an accelerated NVQ level two in performing engineering operations, and moved on to level three. The one maintenance apprentice gained his NVQ level two and now has a maintenance and support role in manufacturing.
Bedford Training Group provided the training on day-release, with the cost being met by the Learning & Skills Council.

Mr Tipping said: “We have grown five skilled electronics manufacturing staff. The apprentices became valuable employees quicker than we expected and are now of similar calibre to the skilled staff we would normally recruit.

“Lack of skills in the area is no longer seen as a barrier to our growth as we have proved that growing our own talent can be a great success.”

The success has totally changed Axis culture, says Paul. “We now have a very positive attitude of management and staff towards taking on apprentices and trainees.”

The firm has taken on another three manufacturing trainees and three apprentices for the customer service, engineering and administration functions.