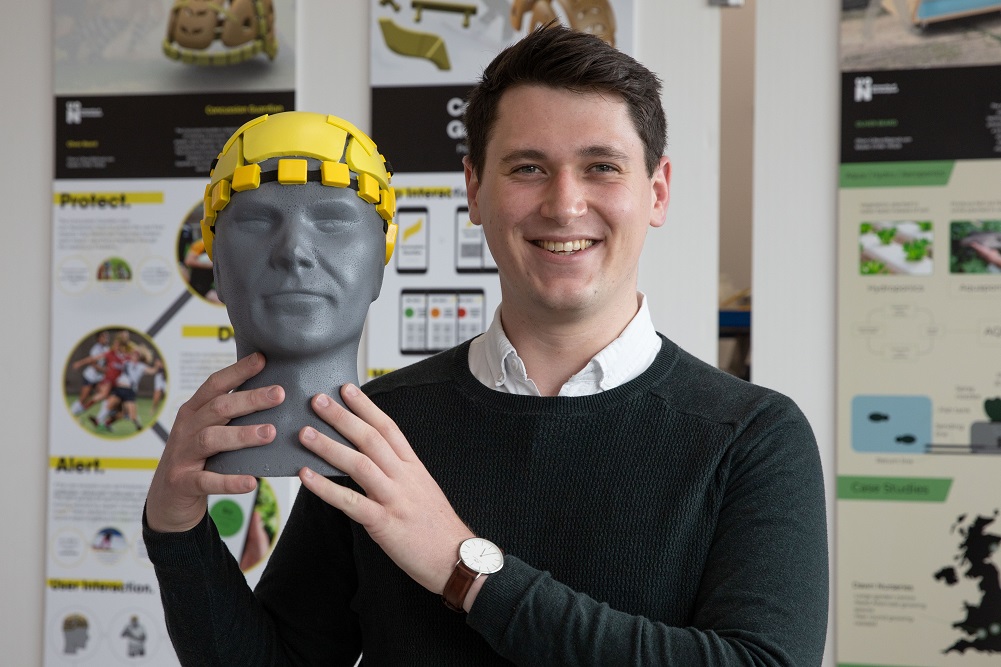 A STUDENT who was knocked unconscious in a rugby match has designed a high-tech skull cap that can detect concussion in people playing full-contact sports.

Oliver Beard took a blow to the head playing for the University of Northampton’s men’s rugby second team and lost consciousness for a few seconds, while a few weeks later a fall while skiing saw him concussed for the second time.

“I am still experiencing the after effects today, as I get headaches and tunnel vision when playing high-intensity sports,” he says.

While the incidents have impacted on Oliver’s health, they’ve also provided the Product Design student with the inspiration for his final year project.

He has designed the Concussion Guardian, a skull cap to be worn when playing full-contact sports which can reduce the likelihood of sustaining concussion thanks to its use of a shock-absorbing foam which hardens upon impact.

But, it also contains a device which tracks impacts on the skull and relays the information to mobile phones. The alerts can be sent to members of the player’s coaching staff and team-mates on the sidelines, ensuring any knocks to the head which exceed a pre-determined level of G-force are spotted and the player can be taken off for treatment.

“My research found that up to 50% of concussions remain unreported and its detection is difficult as only 10% of cases see athletes lose consciousness. So being able to detect cases is a problem, and a problem the Concussion Guardian can solve.”

Looking back on his own experiences with concussion, Oliver feels he would have benefited from wearing the Concussion Guardian.

“When I was playing rugby, I was at the bottom of a ruck after I had been tackled. I was trying to readjust my body position when a knee struck my head, knocking me unconscious.

“I played on through my own choice as I hadn’t known at the time I was concussed, I didn’t feel great and was unfocused in the last ten minutes of the game.

“I didn’t leave the field as the match was very close and we could have won. I recognised I was concussed on the coach home – I was feeling very sick, couldn’t really remember what had happened at the match or the short time after, I also couldn’t hear too much sound or let much light in so I spent the coach ride back with a jumper over my head with headphones on.

“The second team captain told me to go to the hospital as soon as we were back as he was informed on the coach of what had happened. If I had been wearing the Concussion Guardian, it might have prevented the concussion, or its severity, and would also have meant my team-mates would have been alerted and I would have been ordered to stop playing.”