YOU ARE AT: Business MK > News > Rotary Club rallies to boost restoration of local heathland 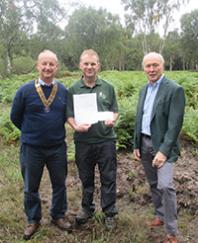 Now, thanks to a donation from the Rotary Club of Leighton-Linslade, the appeal has almost achieved the £50,000 needed to restore the site.

The 17-acre site, next to Rushmere Country Park in Heath and Reach, was thriving heathland habitat until the mid-1990s. But a lack of management since then has resulted in habitats and species, such as Green Tiger beetles and common lizards, disappearing under bracken and scrub.

The site was secured by the Greensand Trust, an independent environmental charity that works with local communities and landowners to conserve and promote the distinctive landscape, wildlife and history of the Greensand Ridge, earlier this year.

Restoration is under way and the donation of £3,500 from the Rotary Club of Leighton-Linslade means this vision has now moved a step closer to reality.

Mr Balaam said: “We are now within touching distance of our £50,000 total thanks to this very generous donation, and all of the other donations and grants received.

"We now need less than £3,000 to support final restoration activity which will hopefully take place later this year, so are asking people to dig deep and spread the word one last time.”

Mr Inwards added: “The Rotary Club of Leighton Linslade is proud to support such a worthwhile asset to our local community. It’s great to see the progress already made on the site and we look forward to seeing the heathland establish itself over the next few years.”

The site will become part of the adjacent Rushmere Country Park and the project will also create a new, much-needed, safe cycle access from Heath and Reach for users of the Country Park. I

nformation panels will help people to learn about heathland habitats and their management, as well as the history of the site.

Donations can be made via: www.greensandtrust.org/appeal/restoring-shire-oak-heath-appeal