YOU ARE AT: Business MK > News > Retailers must keep up with change as consumers ditch PCs for tablets 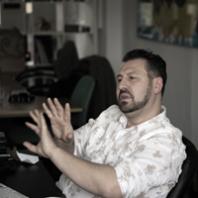 PC shipments continue to decline as more consumers upgrade to a tablet device rather than replace their home PC.

Smartphones are now the primary device used to access the worldwide web, with more than 45 milion used in the UK alone, two web experts in Bedford have told an audience of business people and students at Bedford College.

Chris Smith and Alec East, of THBOOM! Web Consultancy, discussed how website design has to respond to changes in customer behaviour. The talk, entitled ‘Designing for The Connected Consumer’, was part of a programme of joint British Computer Society and Bedford College events at the college.

Both speakers believe that the future for business lies in putting the customer at the heart of a business, regardless of the sector.

Mr East (pictured) said that 45.8 million smartphones are used in the UK, with more than one in five owners using theirs as their first choice access route to the web. How much of any particular site’s traffic comes from handheld devices varies massively according to its audience, he added.

“But one thing is for sure – it has already passed the point of ignoring it.  There is not one rule for everyone so it is more important than ever to understand your audience and their needs.”

Consumers are turning increasingly to tablet devices and one of the hottest issues in web developer circles this year is accessibility of websites on various devices other than the standard desktop or laptop screens.  Mr Smith said that, although the subject is not new, it has taken on a new approach with respect to how to deal with the opportunities that lie ahead.

Responsive design, in which the layout and image and font sizes of delivered content from a website are automatically adjusted according to screen size, creates an optimal viewing experience on almost all devices device and does not require any complex server side code or alternative content.

There are drawbacks to responsive design, said Mr Smith, but it remains the most flexible, practical and scalable approach when devising web strategies for mobile and tablet.