YOU ARE AT: Business MK > News > Report calls on government to increase funding of research into brain tumours 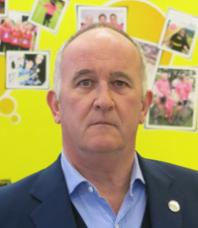 It reveals the distressing experiences of people whose lives have been affected by the disease and explores the reasons behind the historic underfunding of research under successive governments.

Representatives from the Milton Keynes-based charity were among more than 1,700 people who submitted evidence to the Petitions Committee and who attended the launch of the report at Westminster.

The report recommends that measures be immediately taken to increase awareness among health professionals of the symptoms of brain tumours.

The report concludes “patients with brain tumours are failed at every stage – from diagnosis and treatment to research funding”, placing the onus on the government to take remedial action to correct decades of under-funding.

This is the committee’s first ever report. The petition Increase Funding into Brain Tumour Research gained over 120,000 signatures and will be debated in Parliament on April 18.

Brain Tumour Research’s head of external affairs Hugh Adams (pictured) said: “Brain tumours are the biggest cancer killer of children and adults under the age of 40 yet over the last decade just 1% of the national spend on cancer research has been allocated to this devastating disease.

“This report by the Petitions Committee represents a huge step forward for the brain tumour campaign.  Now we really hope that the forthcoming debate in the House of Commons continues this momentum, leading to swift and meaningful action.

“For far too long, brain tumours have been the forgotten cancer.  If we were to continue with the current rate of spend it would take 100 years to find a cure.”

The charity’s chief executive Sue Farrington Smith said: “This report represents the culmination of almost 15 years of non-stop campaigning by UK brain tumour charities for the UK government to take action around greater awareness of brain tumours and increased funding to accelerate the research needed to find a cure for this devastating disease.”

Mrs Farrington-Smith set up the charity after her niece Alison Phelan died from a brain tumour in June 2001, three weeks before her eighth birthday.

She said: “It is thanks to the tireless support of our brain tumour activists across the UK that we have now reached this milestone. This ground-breaking report makes it clear that brain tumour patients have been failed at every hurdle.

“The recommendations to the government are bold and clear: implement an early diagnosis strategy for GPs and clinicians; use their influence to galvanise the game-changing levels of funding for brain tumour research needed to provide effective treatments, and remove the systematic barriers to continuous and sustainable brain tumour research.

“Together we will find a cure.”

Now in its seventh year, the campaign will see people at schools and workplaces across the country donning hats of all descriptions, organising hat-themed events, and making donations to the charity.

Wear A Hat day sends a message of hope, solidarity and support for patients, and families who have lost a loved one to this dreadful disease.