YOU ARE AT: Business MK > News > Report backs success of Business Improvement District 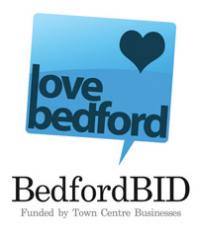 The report by Colliers International reveals that Bedford has the second lowest percentage of empty shops in the South East. BedfordBID vice chair Kevin Kavanagh says the report, which studied 365 towns in the UK, demonstrates how the town centre has been boosted by being a Business Improvement District.
BedfordBID is a legal arrangement by which businesses in a specific zone vote to pay a levy which goes into a pot administered by their own representatives. The money is then used to support businesses and promote trade in the town centre.
Marketing events coming this summer include:
A Book Festival, in partnership with the We Are Bedford action group;
The return of the ‘Out of Blue’ series of activities aimed a children.
The year-round BID Voucher scheme continues to put £100,000s through local tills and the www.lovebedford.co.uk campaign is continuing to boost local business.
Mr Kavanagh, who owns Frescoes Coffee Shop in Mill Street, said: “A thriving town centre means shops and offices are occupied and customers keep coming back. Bedford has the lowest percentage of empty shops in the region, second only to wealthy St Albans.
We believe that this is, at least in part, thanks to the BedfordBID and our work to keep the town centre busy.”
The national report noted that towns which had a big tourism offer did better than others. Bedford BID encourages people to visit the town for a day out by the river, lunch in a lovely location and shop among the hundreds of independent stores. Units at the long-awaited Castle Quay development is gradually becoming occupied.
Mr Kavanagh said: “Where there are empty shops in Bedford it is not through a lack of interest. Often behind-the-scenes negotiations are going on between landlords and tenants but these things can take a long time.”