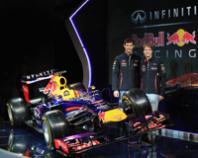 In front of an audience of team members, partners, guests and international media at its headquarters in Milton Keynes, drivers Sebastian Vettel and Mark Webber drew back the sheet to reveal the RB9, the final instalment in a generation of designs that have bought Infiniti Red Bull Racing 34 grand prix victories and six World Championships.
Nine times grand prix winner Mark and triple World Champion Sebastian were joined on stage by team principal Christian Horner, chief technical officer Adrian Newey and corporate vice president global marketing communications representing Infiniti, Simon Sproule.
Despite the largely unchanged nature of the technical regulations for 2013, Adrian Newey explained that the off-season was far from relaxed.
“It’s a tribute to all the hard work of the guys over the winter because we had a very tight championship battle last year,” he said. “It was difficult trying to continue development of last year’s car while also doing research into the RB9. Obviously it worked for us, but it gave us a very tight timeframe to design and manufacture this car.”
He described the 2013 car as “evolutionary”.
Driver Mark Webber is preparing for his seventh season behind the wheel of a Red Bull car. “I think the way we keep people excited and motivated here is important,” he told the audience at the firm’s Tilbrook factory.
“It’s quite a small operation but obviously we’re big on ambition and desire and that makes us perform very well. I’ve really enjoyed the years I’ve had here so far and I can’t wait to get going this season.”
His colleague and three-time World Champion Sebastian Vettel said: “We had a very strong finish last season, but it was hard as the season was so long. I’m very excited because this is the first time I’ve seen the car in one piece.”
Team principal Christian Horner added: “The 2012 season was tough and long, but our success was testimony to all the hard work and dedication in the factory. We’re fortunate that we’ve been able to maintain continuity within our group.
“This is the fifth year that this driver pairing has been together. We’ve got continuity throughout all of the technical teams and all the key areas. I think that’s proof that there is a fierce determination to keep both of those trophies in the cabinet for another year.”
The team is now is Spain to begin testing of the RB9 at Jerez.