YOU ARE AT: Business MK > News > Red Bull Racing receives Freedom of the Borough 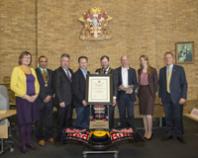 Christian Horner, team principal of the Tilbrook-based quadruple and current F1 Constructors champions, received the honour at a ceremony in the Milton Keynes Council chamber.

The council has awarded Freedom of the Borough for the significant impact Infiniti Red Bull Racing has had on the Milton Keynes economy, as well as for bringing positive attention to the borough on an international scale through its four Drivers World Championships won by Sebastian Vettel, its 47 Grands Prix wins and as the current holder of the Constructors Championship..

In accepting the award, a ceremonial scroll andbowl, to loud applause, Mr Horner said: “This is quite extraordinary. For us to receive this award is something that the whole team is tremendously proud of and on behalf of the whole team based here in Milton Keynes a very, very big thank you for the kind words that have been said tonight.”

He added: “It is with great pride that we’re based in Milton Keynes. We employ just over 600 people – and for us it’s the perfect place to be based.”

Mr Horner was joined by technical director Adrian Newey, who stressed their success was always a team effort, praising their burgeoning partnership with the Open University.

In presenting the award, the Mayor praised the team not only for its racing success and the huge knock-on benefits for Milton Keynes but also its inspirational impact on the city.

Cllr White said: “One of the things that’s really inspirational is the way that engineering has been given a boost – the kids want to aspire to be engineers again, thanks to the success of your team.

Council Leader Andrew Geary added: “Formula One developing in the area, and moving into Milton Keynes in the way it did and evolving with our city is something we have been rightly proud of.

“We have an aspiration to be an international sporting city, and the part you are playing in that by promoting us around the world is adding massively to that agenda.”

Silverstone managing director Richard Phillips said: “Companies like Red Bull should be applauded – they demonstrate everything that is great in the UK and how proud we are, and we’re very, very proud that they are based here in Milton Keynes.”

He added: “The team is a great ambassador for inward investment and business growth, bringing massive economic benefits to Milton Keynes.

Jim Marshall, founder of Marshall Amplification, received the Freedom of the Borough in 2009 and entertainer Dame Cleo Laine, the inspiration behind the Stables Theatre in Wavendon, two years later.

In 1998, the council conferred  the honour of Freedom of Entry into the Borough on The Royal Green Jackets (now known as The Rifles Regiment), allowing the regiment to march through the streets of the borough in full ceremonial dress, which includes the Regiment’s band and bugles playing.