YOU ARE AT: Business MK > News > Recognition technology boosts plight of Syrian refugees 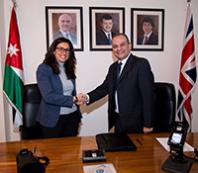 IFC, a member of the World Bank Group, has signed an agreement with Milton Keynes-based IrisGuard to help it expand the reach of its iris-based e-payment solutions, designed to help refugees and vulnerable displaced populations access cash or goods.

With IFC support, IrisGuard will develop and roll out new iris recognition point-of-sale devices throughout Jordan and the region. More than 2.3 million Syrian refugees in Jordan and the region are registered in the system so far, allowing them to simply use their eyes to withdraw cash at selected ATMs or pay for goods at participating stores.

IrisGuard’s research and development operations are based in Milton Keynes at Shenley Pavilions.
Managing director and co-founder Imad Malhas said: “Many people in the MENA [Middle East and North Africa] region do not have access to a traditional bank account to access benefits, save money, or make payments, which is why IFC has been supporting new and innovative payment systems like IrisGuard.

“Our technology has the potential to help lift vulnerable beneficiaries out of poverty and contribute to accelerating economic development throughout the region.”

Traditional methods of assistance, where refugees often wait in line for cash, paper vouchers or food, can result in losses of up to 20% as well as issues such as identity theft and corruption.

Iris-recognition technology is ten times more accurate than fingerprints and impossible to replicate, can help reduce this loss.

The IFC country manager for the Levant Dalia Wahba said: “MENA is fast becoming a tech hub for innovative companies like IrisGuard. Initiatives like this show that technology and innovation can play a critical role in addressing humanitarian and developmental challenges like the current refugee crisis, a key priority for our work in the region.”

UNHCR has already registered over 650,000 Syrian refugees in Jordan using IrisGuard’s biometrics technology, and the company has been awarded contracts by UNCHR and the World Food Programme to distribute aid in Jordan and soon in neighbouring countries in the region as well.

IFC’s work with IrisGuard is part of a wider strategy to promote private sector investment in developing countries, helping to reduce poverty and improve lives.