YOU ARE AT: Business MK > News > Rates changes could deliver £20m a year for town centre

Rates changes could deliver £20m a year for town centre 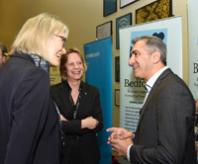 That was the message to Margot James, the Minister for Small Business, when she visited the town to speak at a Bedford Community Business School event at the invitation of the town’s MP Richard Fuller.

BedfordBID representatives Christina Rowe and Ismail Anilmis told the minister that changes in business rates had been generally good news for town centre shops and the new rules mean a reduction in bills for most independents.

Plans for business rates that previously went to central government now to go to local councils are expected to generate in the region of £20 million a year from the town centre.

“BedfordBID is looking forward to seeing how this is going to re-invested,” said a spokesman.

The Bedford Business Improvement District represents 500 businesses who pay a special levy which amounts to £400,000 a year and is used to promote the town under the Love Bedford banner.

The minister was in Bedford to address 400 commercial leaders and entrepreneurs at a Bedford Community Business School meeting held at Kings House in Ampthill Road.

She and local HR expert Carole Scott outlined the importance of looking after staff. They are the most important asset to any company, the minister said.