YOU ARE AT: Business MK > News > Pub company raises a glass to rise in profits and turnover

Pub company raises a glass to rise in profits and turnover 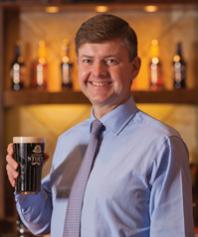 The profits rise came from managed houses, investment totaling £3.7 million in leased and tenanted pubs and extended and new contracts across the company’s world beers portfolio.

Charles Wells France opened two new pubs and reported an increased operating profit of 126%, while the company invested £1.2 million in the £1.2m was invested in the brewery’s brewhouse.

The company also unveiled a new advertising campaign for its flagship Bombardier beer and a new Pizza, Pots and Pints theme in two of its pubs, a concept Charles Wells plans to roll out this year, Mr Phillimore said.

He added: “We will be focusing investment in our managed houses, accelerating roll-out of our Pizza, Pots and Pints concept and actively looking for more sites across France.”

The company has also created a new five-point continuous development plan for licensees to start after their initial 12-month new business training.

Mr Phillimore said: “Leased and tenanted pubs will see greater training and guidance for anyone who needs it and we will continue to support them with a wider portfolio of beers to entice customers in and increase their own profits.”