YOU ARE AT: Business MK > News > Prototype targets breakthrough in cancer detection 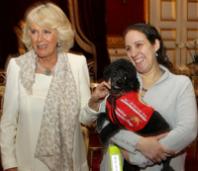 Researchers at the OU’s Animal Computer Interaction Lab in Milton Keynes have worked with the charity Medical Detection Dogs, based at Great Horwood, to design a special pressure pad.

It is a development of the current procedure in which dogs sniff a metal pad on top of a sample tube, using their keen sense of smell to detect traces of volatile compounds given off by cancer cells. The dog indicates the presence of cancer cells to its handler, for example by sitting.

The ACI Lab has added a special pressure pad to sense the level of pressure the dog exerts while sniffing, indicating the level of confidence the dog has that cancer cells are present.

The device is being tested on a range of cancers, including prostate cancer. Researchers hope it could provide a more accurate early screening service without the need for invasive tests.

Dr Clara Mancini, head of the ACI Lab, said: “If this prototype is successful, we could see this device in use within the next three years.”

The ACI team runs the world’s first systematic research into ‘user-centred’ technology for animals. It has also worked with the charity Dogs for the Disabled to develop buttons for dogs to operate doors, lights or household appliances more easily by using their noses or paws. The aim is to reduce the training time as the dogs learn with the set of buttons which can then be installed in the home.

The ACI Lab’s work has been on display at the Royal Society ‘Technology for Dogs’ Summer Science Exhibition. It also featured a diabetes alarm developed in partnership with Medical Detection Dogs.