YOU ARE AT: Business MK > News > Prize fund boost ahead of Travis Perkins Masters at Woburn

Prize fund boost ahead of Travis Perkins Masters at Woburn 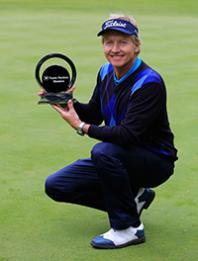 England’s Philip Golding will defend his title over the Duke’s Course at Woburn Golf Club from August 31 to September 2.

This year’s total prize money will be £380,000, an increase of £20,000 on 2017 when Golding claimed his fourth Staysure Tour title by edging out American Clark Dennis and Ireland’s Brendan McGovern in a dramatic finish.

The winner in 2018 will collect £57,000 – £3,000 more than Golding picked up for his victory last year. Additionally, the new champion will again receive a bonus of £10,000 thanks to the generosity of the Duke of Bedford, the president of Woburn Golf Club. The ‘Duke’s bonus’ is unofficial prize money and does not count towards the Order of Merit.

Golding said: “I am looking forward immensely to defending my title in September. Thanks to Travis Perkins, one of our longest active sponsors, and the Duke of Bedford, this event creates an atmosphere that is second to none.

“As players, we are delighted to see the Staysure Tour going from strength to strength, with a new umbrella sponsor, more tournaments coming on stream and improved prize money.

“The Duke’s Course is a perfect venue for senior golf; the weather has tended to be kind to us and the public have turned out in large numbers to spectate. The Tented Village is compact, close to the clubhouse, first tee and 18th green and generates a really nice atmosphere.

“There is nothing better than playing in a top-class tournament with a good ambience and lots of people watching at a world class venue steeped in tournament history, having hosted over 55 professional tournaments across its three courses, the Duke’s, Duchess and Marquess.”

www.businessmk.co.uk is offering you the chance to win this superb prize, with lunch. All you have to do is answer a simple question and email your entry to [email protected] by August 9. To find out more, click here and turn to page 11

The 55-year-old from Bushey in Hertfordshire is excited at the prospect of this year’s tournament, when the public can enjoy ‘Free Friday’ on August 31, with no admission charge for the first round to mark 15 years of sponsorship by Travis Perkins, the UK’s largest merchant builders.

Tickets, currently available at the advance price of £10, can be purchased for play on September 1 and 2.

Golding recalled the drama of last year’s tournament, when he found himself seven shots behind Dennis with 11 holes remaining but managed to get the job done by a combination of some fine play and a disappointing finish by the American.

He said: “I was four strokes behind going into the final round and I thought I was playing for second place after dropping seven behind, despite birdie-ing two of the first five holes.

"However, for some reason, things didn’t go well for Clark and I just kept going. You never know what can happen in golf and, sure enough, the cards fell my way when I birdied the 16th and Clark had a third double bogey at the same hole.”

Tickets for the final two days on September 1 and 2 are priced £10 in advance and £15 on the gate. Priority parking is available in advance for £10 daily, including a free programme and draw sheet, while general public parking is free of charge. Under-16s are also admitted free.

Tickets are available now on www.europeantour.com/tickets