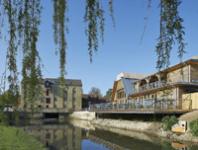 On his visit to Jordans Mill (pictured) in Biggleswade, the Prince will meet six locally based companies including a 300-year-old hat maker and a brewer with over 100 years’ experience. The firms export to countries both within Europe and further afield including USA, UAE, and Japan.

The East of England has seen an 8.7% growth of exports to countries outside the European Union at £12.11 billion, accounting for 44% of the region’s overall exports compared to 39% a year ago.

The export section of the Prince’s visit to the region has been organised by UK Trade & Investment as part of efforts to promote exporting and help the government achieve its target of getting up to 100,000 more SMEs to export. Its figures suggesr that could generate an extra £30 billion for the UK economy.

Liz Basing, UKTI’s East of England regional director, said: "More and more companies are finding that there is a strong demand overseas for products that have both the heritage and badge of quality given by the ‘Made in Britain’ stamp.

“Today puts a group of top Bedfordshire exporters in the spotlight and I am delighted we have the opportunity to showcase these companies as a sample of the best the county has to offer.

“Companies that seek out help from UKTI do better and I encourage businesses inspired by today’s visit to get in contact with us.”

Helen Nellis, HM Lord-Lieutenant of Bedfordshire, said: "I am looking forward to welcoming the Prince of Wales to our county and introducing him to the range of excellent businesses which thrive in our community.

“Jordans provides a wonderful setting in which to showcase the best of Bedfordshire."

The companies who the Prince will meet have all received, or are about to receive, support from UKTI to export:

Last month UKTI launched a new national campaign, Exporting is GREAT, which is targeting almost 3 million people with the ambition of generating 3000 appointments with UKTI Advisers and driving £1.2 billion in export revenue from the leads it generates.

With businesses earning £100,000 on average in additional sales within 18 months of working with UKTI, there is significant growth potential for SMEs that start exporting.