YOU ARE AT: Business MK > News > Prime Minister raises a glass to Bow Brickhill brewery 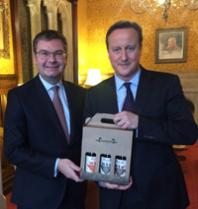 The gift was handed over by Milton Keynes South MP Iain Stewart early this week.

Hornes Brewery, which opened in March, invited Mr Stewart to visit their site back in the summer and taste their Triple Goat ales.

Following the visit Mr Stewart wrote to the banqueting department in the House of Commons and the Hornes brews have been invited to be the Guest Beer early in 2016.

On top of that the Prime Minister is set to open a bottle on Christmas Day.

The inspiration for the brewery’s beers came from the Horne family’s three goats, Herbie, Sooty and Dusty who reside in the paddock beside the brewery.

Mr Stewart said: “Last year I gave the PM a MK Monopoly Board and I fear the children probably got most use out of it. This Christmas I thought a few beers wouldn’t go amiss after a busy year.”

Head brewer Ryan Horne added, “I am delighted Iain choose to give the PM one of our Ales, I hope he enjoys it.”