YOU ARE AT: Business MK > News > Politics prepares for a new era, says historian 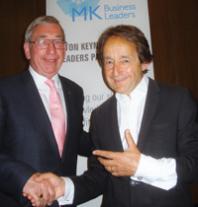 Skills Minister Nick Boles resigned his post 24 hours before he was to speak at a Milton Keynes Business Leaders Partnership dinner.

In stepped eminent political historian, author and commentator Sir Anthony Seldon, vice chancellor of the University of Buckingham, who delivered his insight into recent events in British politics, “the like of which we have never seen before. These are extraordinary times,” he said.

Sir Anthony’s theme was New Beginnings, which he said should include Milton Keynes as it approaches its 50th anniversary and shows more promise than any other city in the UK, straddling the “powerhouse” corridor between London and the North and at the centre of the Oxford-Cambridge corridor.

It was also a new beginning for Britain in Europe said Sir Anthony, who had argued for Remain. “We should all now work to make the most of the opportunities that come about.”

His candid analysis of the new beginning with a new Prime Minister and Cabinet absorbed his audience. He described Theresa May as “tireless and calm”.

Her strategy now is to keep the Conservative party together by bringing all elements within the cabinet.

Sir Anthony (pictured with MKBLP chairman Dr Philip Smith) said: “The institutional problems facing the country are enormous and the biggest is the economy and the likely impact of Brexit, even if we have a soft landing.”

The arrival of every new Prime Minister begins with high hopes, Sir Anthony said. “It is perhaps like watching the England football team go into a major tournament. We just know that it really will all work out this time…”