YOU ARE AT: Business MK > News > Police praise staff’s bravery in suicide intervention 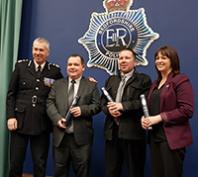 Richard Barber and Paul Warren, security officers at the Mall in Luton, and the shopping centre’s soft service manager Glenda Lorenc were praised for their courage at a ceremony held at county police headquarters in Kempston.

Presenting the commendation, Chief Superintendent David Boyle said: “They all showed great tenacity and bravery. I have no doubt that without their quick thinking and swift intervention there would have been fatal consequences.

"They are a huge credit to The Mall and great partners to the police.

“It was an honour and privilege to recognise the brilliant work of Glenda, Paul, and Richard, along with the police colleague who attended this incident.”

“I am very proud of our team and how they responded to what was a dangerous and quick-moving situation,” he added.

“Their response demonstrates the significance and importance of such training. I am also very pleased that Bedfordshire Police have recognised Glenda, Richard and Paul and how they dealt with the incident that day.”

The Mall’s management team and security officers attended the annual Bedfordshire Police Community Cohesion ‘Thank you Awards’ at The Auction House in Luton, at which they were thanked for their support and assistance to Bedfordshire Police in the last year.