YOU ARE AT: Business MK > News > Planning inspector backs blueprint for borough’s growth 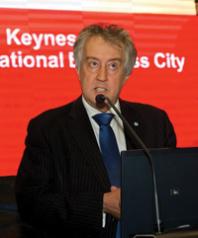 The decision on Milton Keynes Council’s Core Strategy means more certainty for developers and investors, as well as reassurance for those keen to protect the borough’s open spaces and the countryside surrounding Milton Keynes.

The key points of the Core Strategy are:
Cllr David Hopkins (pictured), Cabinet member responsible for strategic planning, said: “It is very gratifying that the Inspector largely passed the plan without too many major amendments.
"This gives us some welcome support for both where and how growth and development happens in Milton Keynes over the next 13 years.
“Milton Keynes has already been named as the best place to lead the country out of recession and this now gives us the framework to encourage further building, inward investment and growth.”
The strategy spells out where and how the borough of Milton Keynes is to develop over the next 13 years.
The plan – the result of extensive public consultation – will now go before full council for final ratification before it can be adopted.
Public examination hearings took place in July last year before an independent Inspector representing the Secretary of State. Full council agreed the document in January, pending comments from the Planning Inspector.
The Milton Keynes strategy has succeeded despite being prepared during a period of significant legislative and policy change together with legal arguments made through the courts, said a council spokesman.
A significant number of other Core Strategies across the country have failed and been found unsound or have had hearings suspended or been withdrawn,. At least 32 have failed to meet the statutory tests.
The Inspector recommended very few changes when she returned her findings. The strategy with the modifications approved in January has been confirmed as sound and legally compliant, and capable of adoption, the spokesman added.