YOU ARE AT: Business MK > News > Planners show they are on the ball

Planners show they are on the ball 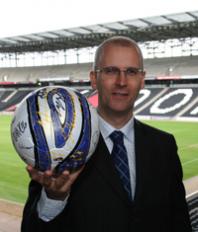 Savills planning team in Milton Keynes has notched up a third success in the football field, having advised Tottenham Hotspur FC with its submission of a planning application for a new stadium. The project follows the successful promotion of new football stadia for Milton Keynes Dons and Arsenal.
Savills Milton Keynes, which carried out the Environmental Impact Assessment, was part of a team which put together the application for a world-class stadium, public square, hotel, supermarket, new homes and space for the Tottenham Hotspur Foundation.
Patrick Duffy (pictured), of Savills Milton Keynes, said: “This is an exciting project which will bring significant benefits for the community and has the potential to act as a catalyst for the regeneration of this particular area of London.”
Mr Duffy and his team also undertook the EIA for Arsenal’s Emirates stadium, the redevelopment of Arsenal’s former stadium and other associated development.
Having also provided planning advice to InterMK in relation to StadiumMK and its associated development, Savills is also advising on the development of the Denbigh North site.
Mr Duffy said: “The selection of the MK Dons stadium as one of the venues, if England wins the World Cup bid, is a real boost to the future of the site.”