YOU ARE AT: Business MK > News > Pioneering professor, who led initial research into child exploitation, retires 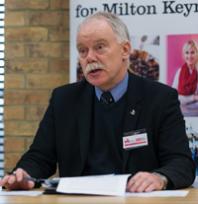 Professor David Barrett (pictured) wrote a ground-breaking book in 1997 entitled Child Prostitution in Britain, which led to significant changes not only in the law but in the application of social work where young people are vulnerable to abuse.
“As a social worker I took a particular interest in children who came from exploited backgrounds,” he says. “I always thought the policy in the whole area, right across a whole number of different areas including health, policing and social work was frankly a real mess.
“14-year-olds were being convicted for a whole range of offences in relation to prostitution having fooled the courts into believing they were actually 17. Things have moved on in recent years and I never dreamt there would be so much new legislation around areas like trafficking and domestic servitude as there has been of late and that is a real positive.
“Much of it came about as a result of lobbying campaigns centred around that book and that makes me very proud.”
He admits that the subject was a particularly tough area to decide to focus on. “It’s not just difficult,” he says, “it’s quite miserable and it would be really odd if it didn’t feel that way. It’s not unusual for researchers to be haunted and given nightmares by what they’ve heard.
“I do quite a lot of work at various universities around the country around the support systems needed for the people who are actually having to work through very distressing material.
"However it’s important to remember that children are overall much safer than they were 20 years ago and that our systems of child protection in Britain are regarded extremely highly elsewhere in Europe.”
The research carried out by Professor Barrett during the 1980s and 1990s and his ongoing involvement in subsequent research by colleagues at the University of Bedfordshire was recently recognised with the highly prestigious Queen’s Anniversary Prize for Higher and Further Education.
He is to be honoured by the University of Bedfordshire, which has made him Professor Emeritus, and he hopes to also become a trustee of the Bedfordshire Students’ Union.
In retirement he will remain as interim Dean at UCMK and will continue to supervise PhD students.
He is planning a holiday on the other side of the world and has tickets for the fifth Ashes Test in Sydney… although he had hoped to be going to see England retain the trophy.
He is a keen birdwatcher and music fan who lists among his most memorable moments, “going to a party and listening to the rock band Hawkwind playing in a friend’s garage. I’m pretty sure the rest of the village heard it too.”
His two daughters studied Law and Medicine at University and he was rather proud to know that both had cause to read his work as part of their courses.
University of Bedfordshire vice-chancellor Bill Rammell says: “David’s commitment and contribution to the university, our wider mission, and to students and peers, has been immense. His leadership over the last 12 months has been the significant factor in the success of UCMK this year.
“I would like to thank David, and formally recognise his dedication to his discipline, his counsel to colleagues at UCMK and across the university and his international contribution to teaching and research.”