YOU ARE AT: Business MK > Aviation > Pilots take flight with Monarch HQ memento 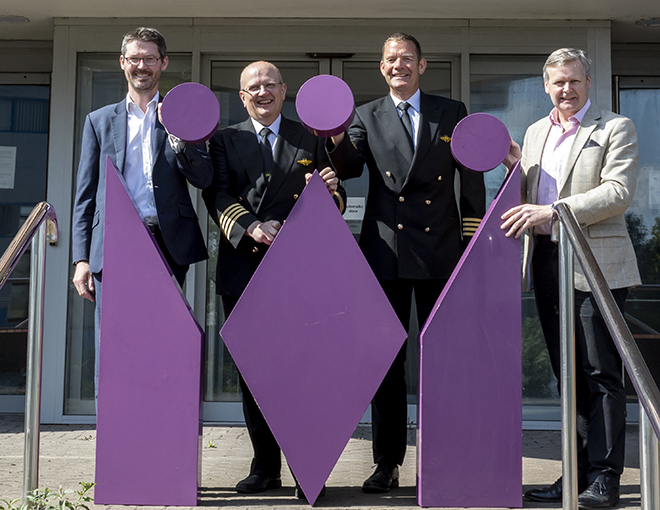 AS WORK begins to modernise and refurbish the former headquarters
of Monarch Airlines at Luton Airport, two ex-pilots of the collapsed airline
have sought an illuminating memento.

Captains Andy Lancefield and Andy Baldwin are pictured with the
Monarch logos that graced the front of the building on Percival Way after they contacted
the building’s new owner – regional developer Hampton Brook – about the future
of the illuminating signs.

“Both myself and Andy worked for Monarch as pilots for over 20
years until its unfortunate demise and thought it would be fitting to preserve
a piece of its history,” says Mr Lancefield. “At the time of asking, I hadn’t
mentioned to my wife that I could be the future recipient of the sign but
thought it would be easier to ask for forgiveness than permission…”

Hampton Brook is
pushing ahead with its significant investment of over £3 million into
refurbishing the 36,000 sq ft headquarters building that was constructed for
the former airline in the 1990s. Once building works have been completed,
the property – now named Infinity House – will deliver Grade A accommodation in
suites from 11,500 sq ft, excellent energy efficiency and car parking for more
than 200 vehicles.

“Having received this surprise request, we were happy to oblige
and gave instructions to our contractor Warwick Burt to ensure the signs were
carefully removed from the building,” says Hampton Brook development director
Ian Jackson.

The two pilots
watched on as the cabin trainer that was routinely used by pilots and cabin crew
for evacuation training, as well as door training and passenger announcements, was
removed from the building.

“Seeing the cabin trainer emerge from the side of the building
brought back memories of smoke-filled cabin searches and emergency exit
training with the inflatable slide – subsequently banned after a couple of
broken limbs, thankfully not mine,” says Captain Lancefield as he receives the
Monarch crowns.

“I have a few ideas on where the sign will go but ultimately it is
nice to be able to preserve a little bit of the ‘Old Spotty M’ as we were
known.”

Luton Airport
has announced plans to invest over £1.5 billion at the airport, the fifth
largest and fastest growing airport in the UK, by increasing flight destinations
and passenger numbers from 18 million to 36-38 million per year. Construction
has now commenced on DART, the Direct Air Rail Transit, making the connection
from Luton Airport Parkway Station to the terminal in around five minutes when
completed in 2021.

Hampton Brook
expects a high-calibre occupier will be keen to take advantage of both the
sustainable features the building has to offer and the wider transport
improvements taking place at the airport.  There is already strong
interest in the building, Mr Jackson says.