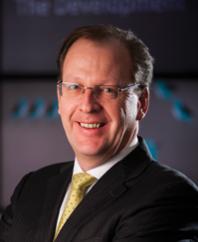 Almost 1.5 million passengers travelled through the airport in May, a 3.6% increase compared to May last year and the 16th consecutive month that passenger numbers have topped one million.
The airport’s current £160 million redevelopment project has the potential to unlock much-needed air capacity in the South East but better rail links are needed for LLA to reach its full potential, says London Luton’s chief executive Nick Barton pictured.
He believes the renewal of the East Midlands rail franchise offers a chance to address this and the Department for Transport’s recently-published invitation to tender highlights the importance of improving air rail links to both London Luton and East Midlands Airport.
Mr Barton said: “The Cabinet’s recent approval of the third runway at Heathrow will not solve London’s capacity problems alone. Regional airports need to be able to meet their full potential, and improved rail links are essential to achieving that.
“The DfT has recognised that in the East Midlands rail franchise and we hope the bidding rail companies will seize this once-in-a-decade opportunity to improve rail services for passengers and help ease the UK’s capacity crunch.”

London Luton is calling on bidders for the franchise to include four fast trains per hour between Luton Airport Parkway and central London. Not only will this increase the proportion of passengers travelling by rail, it can also be achieved with no capital expenditure, it says.