YOU ARE AT: Business MK > News > Parks Trust pays tribute to retiring chairman 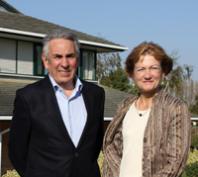 John Duggan has been succeeded by economic development consultant Liz Gifford. A new piece of public art, Onwards and Upwards, by sculptor Robert Koenig has been installed in Campbell Park and dedicated to John in recognition of his contribution to the trust.
Mr Duggan said: “It is a source of great satisfaction to have played my part in creating a financially sound, effective, responsive and agile organisation with which all those involved are proud to be associated.”
Parks Trust chief executive David Foster paid tribute to Mr Duggan’s “extraordinary dedication, skill as a businessman and vision.”
Four other trustees have also retired: Dave Thompson, Isobel McCall, Tim Skelton and Mike Galloway. Mr Foster said: “We are very lucky to have had the opportunity to work with people of such a high calibre and who have given so generously of their time.”
Mr Duggan’s successor Liz Gifford has been a trustee since 1995 and deputy chair since 2007.
Three new trustees have been appointed to the board for an initial three years: Ric Brackenbury, Jean Nicholas and business consultant Keith Edginton. Richard Forman is the Parks Trust’s new deputy chair.
Pictured: Liz Gifford and John Duggan.