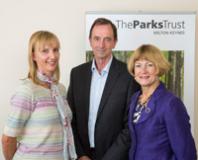 Trustee Zoe Raven has been appointed deputy chair. She is pictured (left) with Richard Forman and Liz Gifford.

Three other trustees Ric Brackenbury, Helaine Griffin and Jonathan Silvertown have also retired and two new trustees have been appointed to the Board.

They are Cllr Sam Crooks, nominated by Milton Keynes Council, and James Macmillan.

Parks Trust chief executive David Foster said: “Our retiring trustees have made a tremendous contribution to the trust and we’d like to thank them for their dedication and for sharing their expertise with us.

“Our new trustees are joining us at an exciting time when we expect to take on around a further 250 acres of green spaces. We look forward to their involvement as we continue to maintain, promote and improve the parks and build the long term financial foundations of the trust.”

He paid tribute to Liz Gifford, who joined The Parks Trust board in 1995, becoming deputy chair in 2007 and chair in 2011. “Liz has given her time selflessly to The Parks Trust for nearly 20 years. Like all Trustees she was initially appointed for a three-year term but became such an invaluable member of the Board she was reappointed again and again.

"Liz’s good common sense, clear thinking and grasp of what matters to local people have all helped keep the Trust focused and purposeful.”

The Parks Trust looks after about 25% of the new city area, works with over 6,000 children each year on environmental education programmes and organises over 200 events in the parks each year.

It is an independent, self-financing charity that cares for 5,000 acres of parks and green spaces across the city at no cost to local taxpayers and is funded entirely through its commercial properties and investments and by enterprises on its parkland.

Liz Gifford said: “I have learnt a great deal in my time on the trust’s board and very much enjoyed the whole experience. The commitment to quality experiences for all citizens and visitors and the focus on long term planning and financial sustainability will remain with me.”

Her successor Richard Forman, chief executive of automotive services and property investment company Fevore Group, joined the Board of the Trust in 2008.
He said: “I would like to thank Liz for her excellent stewardship and wise counsel over many years of service to The Parks Trust as trustee, deputy chair and chair.
"I look forward to continuing to work with my trustees in supporting David and his dedicated team as they strive to deliver wonderful diverse parkland environments in Milton Keynes for us all to enjoy.”

The AGM also approved the Parks Trust annual report and accounts for the last financial year 2013/14. The Trust built its assets to £89 million, purchased Whitecap Leisure, enabling it to take ownership of leisure activities at Willen Lake, started work on the new education and visitor centre at Howe Park Wood and opened MK Rose, the new public place for commemoration and celebration in Campbell Park.