YOU ARE AT: Business MK > News > Overseas success wins university a Queen’s Award 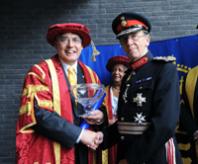 The Lord-Lieutenant of Bedfordshire Sir Samuel Whitbread presented a glass rose bowl and certificate to Vice Chancellor Professor Les Ebdon CBE at the university’s new £34 million Campus Centre.
The university has increased its overseas income by 154%. More than a third of its students are from abroad, representing more than 100 countries.
Sir Samuel described the income increase as an “outstanding achievement”. He added: “The Queen’s Award is one of the most prestigious awards for any business.”
Professor Ebdon (pictured with the Lord Lieutenant at the ceremony) praised the work of the university’s international team led by Professor Ashraf Jawaid, the deputy vice chancellor.
He added: “Professor Jawaid and his team have worked tirelessly to grow our international market. We believe that higher education should be borderless and that the 21st century job market is a global one. That is why the University of Bedfordshire is proud to be a truly, international university with a third of our students coming from overseas and representing more than 100 countries.
“It is this significant growth in numbers which was instrumental in us winning the Queen’s Award and I am delighted that this success in international trade has received Royal recognition.”
The Queen’s Awards for Enterprise are awarded to businesses for outstanding achievement in International Trade, Innovation and Sustainable Development.