YOU ARE AT: Business MK > Education > OU opens the new Jennie Lee Building 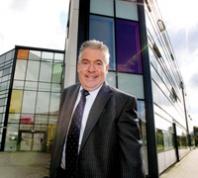 Around 250 of the university’s first ever students visited the Walton Hall campus, some for the first time. Nothing like The Open University existed before they began their studies and for many it changed their lives.
The building is named after Jennie Lee, a coalminer’s daughter who as Arts Minister in Harold Wilson’s 1964 Labour government who played a key role in the formation of the Open University.
It houses a purpose-built high-tech computing department which researches the interaction of people and technology, as well as ways of making learning more accessible.
Jennie Lee wrote in a government White Paper before the 1966 general election: “The Open University will obviously extend the best teaching facilities and give everyone the possibility of study for a full degree. It will mean genuine equality of opportunity to millions of people for the first time.”
The building was officially opened at an event also attended by members of the Lee family, friends of the university and dignitaries.
Pictured: OU vice chancellor Martyn Bean outside the Jennie Lee Building.