YOU ARE AT: Business MK > News > OU backs Living Wage campaign with pledge to staff 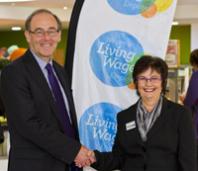 The Living Wage is calculated to be the amount of pay per hour needed for a worker to support a family with the ‘essentials of life’.  The level increased from Monday to £7.65 an hour outside London, which compares to the minimum wage of £6.31 an hour.
All directly employed staff in the OU are paid above the Living Wage level, but there are a number of contract staff who as yet are not.
OU director of estates Alan Burrell pictured said: “It is important, as a socially-responsible employer, that all of our staff are able to provide for themselves and their families. We know that there are potential benefits for the OU too, such as increased motivation and morale.”
From August 2014, contract staff such as cleaners, caterers and a small number of affected security staff working at the OU will move on to the Living Wage pay scale.
Citizens:MK is part of Citizens UK, a campaigning body whose aim is for a fairer society by reducing poverty. It claims that 45,000 families have been lifted out of working poverty as a direct result of the Living Wage.
Citizens:MK has been campaigning to increase the number of accredited Living Wage employers in Milton Keynes.
Debbie Wilson pictured with Mr Burrell, who leads the campaign for the Living Wage for Citizens:MK said: "Citizens:MK are delighted to hear that such a big employer as The Open University has decided to pay its contracted workers the Living Wage. It is also timely that we are able to celebrate this announcement during Living Wage week.”
Other firms supporting the Living Wage include KPMG, Barclays, Unity Trust Bank, Legal & General and the trade union Advance.