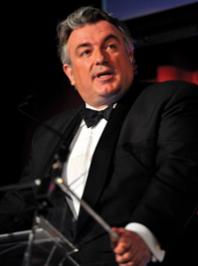 Organised by Milton Keynes Business Leaders Partnership, in partnership with full service marketing agency Interdirect and event management experts Evolution, this year the awards are bigger than ever with new categories, including, Young Business Person of the Year and Cultural Impact, bringing the grand total of awards to 12.

Launched in 2014, the MKBAA recognises the achievements of all businesses, restaurants, attractions and charity organisations across the Milton Keynes area.

Interdirect managing director Nicholas Mann (pictured) said: “The awards are a fantastic opportunity to embrace organisations across a multitude of sectors in our region.

"This year the response rate has been better than ever and we have received over 100 award entries, which is testament to the success and growing kudos of the awards.”

The expert panel of judges have announced the first shortlist.

The new Cultural Impact category, launched to mark the 50th birthday of Milton Keynes, was entered by some of the city’s leading organisations and companies. The Stables, MK Gallery and Milton Keynes College are among those that sparked the judge’s interest and made the shortlist.

The Community Impact category drew a high quality of entries, with Willen Hospice, MK Dons SET and Biogen were among several organisations who impressed the judges into the next round.

The popular Design & Creativity category traditionally attracts some of the UK’s best creative and talented individuals based in Milton Keynes. Marshall Amplification and Ruth Turner Interior Design are two of the entries which have made it to the shortlist.

In addition, Innovation and Technology is another area in which the citizens of Milton Keynes pride themselves and the response to this category was overwhelming.

This year Comms365 makes another appearance, along with Tensator and Transport Systems Catapult to name but a few.

Meanwhile, Cawleys, SMC Pneumatics and Easycopiers make up just a few selected to go through to the next stage of the Energy & Environment’category. In the Professional Practice category, Giving Tuesday champions Shoosmiths make the short list along with fellow law firm Howes Percival and others.

As a key leisure destination, Milton Keynes has some of the best businesses for entertainment. Some of the top sites, including Gullivers Resort and The National Museum of Computing, have made it through to the entry stage.

Even the city’s retailers, despite the run up to Christmas, still found the time to enter, with Wineman, Ipsos and easycopiers making the shortlist.

With a vast mix of restaurants and hotels in the area, judging the Hospitality category was challenging due to the variety Milton Keynes has to offer. However, gastro pub favourite The Swan at Salford makes the shortlist, along with others including Jury’s Inn.
Small business is clearly thriving in Milton Keynes with a huge selection of small enterprises submitting their achievements this year. Those who made the shortlist included Sweat Yoga and Evidence Talks. Finally the Young Businessperson category shows off the city’s excellent new talent, with Ben Turner from Simply Race and Chris Miller from Nemo Group amongst others, on the shortlist.
For the full list of shortlisted entrants visit www.mkbaa.co.uk/firststageresults.

For all entrants the next step is to log into their account and complete the stage two questions so the judges can have more information before they make their final decision.

The closing date for this stage is January 18.

The winners will be announced at an exclusive awards ceremony held at the Double Tree by Hilton Hotel on March 9.